My name is Jorim Rietdijk and I was born in 1980. I have been working at this fo 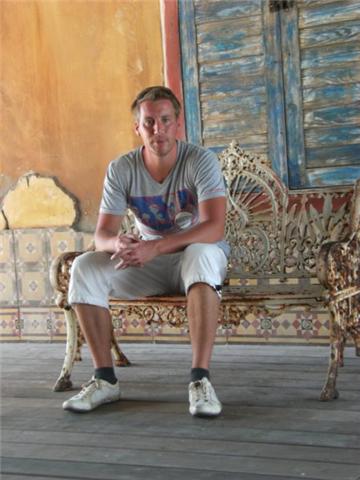 undation since October 2009. You will understand that the decision to work for this foundation wasn't made overnight. This is why I would like to share a part of my life and the way God has called me to work as an evangelist within this foundation. I hope you will be both encouraged and challenged to surrender you life to Him daily.

I was raised in a Christian home with 2 sisters. My parents met in Belgium where they attended Bible College and they were active in street evangelism. I was 3 years old when my parents made real plans to go to a small village in Uganda to work as missionairies. These plans were cancelled because my parents were called to work as social workers at the evangelical rehabilitation center 'De Hoop'.

I enjoyed a carefree youth. However, this changed when I was about 16 to 19 years old. I always went to sunday school and youth group. Not because I wanted to learn, but to do my parents af favor. House music became very popular when I was 16. Together with my friends we often listened to the loudest form, hardcore styling. Listening to this kind of music and going to parties had a bad influence on my life. I could not concentrate well, had trouble sleeping and I became aggressive. I didn't notice this myself, but my environment did. My parents felt forced to intervene at one point. This created a lot of tensions, but it certainly brought forward a change I would experience in my life. I began to realize that I was only focused on getting a certain 'kick', but I had no real rest and peace in my life.

When I was 19, a friend of mine invited me to go to his youth group at his church. These people really carried out their faith and I saw their desire to follow Jesus. I ended visiting their youth group more often to figure out who Jesus was and what He wanted to mean to me. I was 20 years old when my father and I where in my room and my father explained the Gospel to me. I knew I needed to make the choice. I learned to surrender myself to Him that night and I became a child of God.

However, a big change happened in my life in the summer of 2002. At the time I followed a Discipleship Training School at Youth With a Mission (YWAM). Here I received the bible verse Philippians 3:13-14 and this has been the guiding principle in my life to this day. It was also at this place that the desire arose to surrender my whole life completely to Him and to start sharing the Gospel. I got baptized a few months later after I left this school. I worked as a nurse at a hospital at that time. In 2003 I decided to attend the Bible College "De Wittenberg" in Zeist. I was very interested in sharing the Gospel and this is why I chose to focus on evangelization and church development. During this school year I also did an internship at the foundation 'Naar House'. I was very active with street evangelism during those months and it became clear that this work was my calling. I went back to work at the hopital after this year of Bible college and I decided to evangelism one day a week with the foundation 'Naar House'. Since 2005 I really started to pray and search for what God had in mind for my life. I promised Him that I would be willing to give up everything if He would call me to go and work for Him. I had a desire to grow in faith and to develop myself in evangelization. The following years I went on several mission trips to bring the Gospel to different places. The past 4 years weren't always easy. There were times of great joy in my relationship with God, but I also had many times of struggle. In those times I needed to learn to trust Him completely. I needed to learn the meaning of perseverance and I had to learn to be patient. Those were all lessons that I needed to learn for my work today.

to work as a fulltime evangelist at the foundation 'Naar House'. He went on a mission trip to Aruba in 2006. He told me about all the things he had seen and experienced. He would travel to Aruba again in October 2007 and I decided to go with him for two weeks. I also accompanied him in October 2008. It was after this trip that we started to pray together for the people in need in Aruba. We also discussed practical things we could do to help. After a few months on March 18 2009, 'Stichting Wereld Evangelisatie' (Foundation World Evangelization) was founded. My colleague stopped working for the foundation 'Naar House' and started to work fulltime fo this new foundation. The question was what I was going to do. Because I worked at the hospital, it was no possibility for me to go to Aruba for 4 months a year. I started to pray if this was the plan God had in mind for me. After many confirmations of God and many things falling right into place, I decided to quit my job at the hospital. I started working as an evangelist for this foundation since October 2009. The choice to give up so many things wasn't easy. However, I remembered my promise of many years ago. I promised God that I would follow Him if He would call me to go. I knew that the time had come. In the past half year I had the chance to experience and see that God was working in my life. Most of all, I have seen his faithfulness. It is true what the Bible tells us: "Anyone who trusts in Him will never be put to shame".